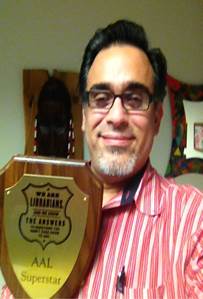 Each month, the Ask a Librarian team picks an outstanding member that has shown exceptional participation in the program. June’s AAL SuperStar recipient is Erick  Dominicis from Miami Dade College.

Erick Dominicis is the Campus Director of Learning Resources at Miami Dade College, Kendall Campus. Erick has been with Miami Dade College for about 14 years. He has been involved with Ask a Librarian for several years, and since taking over as Site Coordinator for Miami Dade College in September 2011, has worked hard to revamp collaboration with the amazing staff at MDC to encourage participation, statewide collaboration, and increase local usage statistics.

His efforts to promote Ask a Librarian services and benefits to staff and students deserve hearty recognition. Erick, your dedication and effort has not gone unnoticed!